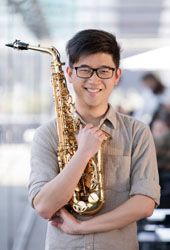 Saxophonist Samuel Phua is a recipient of the National Arts Council Arts Scholarship (undergraduate) 2017 and is furthering his studies at the Sibelius academy with Joonatan Rautiola. He graduated with the International Baccalaureate Career Certificate (IBCC) from the School of The Arts (SOTA), Singapore, where he studied classical music under Leslie Wong and jazz under Fabian Lim.

Samuel has performed as a soloist with several of Singapore’s top orchestras and bands, including the Singapore Symphony Orchestra, Orchestra of the Music Makers, Braddell Heights Symphony Orchestra, Singapore Wind Symphony and The Philharmonic Winds. As a chamber musician, Samuel co-founded the Xin Saxophone Quartet and was the artistic director of the Protégé Saxophone Ensemble (2015-2017). Samuel has represented Singapore at numerous international music events, including the Eugene Rousseau Saxophone Workshop in Wisconsin, USA, the Elite Project Workshop by Jean Marie Londiex and Asia Pacific Saxophone Academy in Thailand. He was also featured in the OKTO documentary ‘Under 18’ shown on Singapore television.

Besides vast performance experience, Samuel has been actively involved in Saxophone pedagogy. He has guest taught and given masterclasses in various schools in Singapore. He is also well versed with the ABRSM syllabus, which he has taught to private students for a few years back in Singapore.